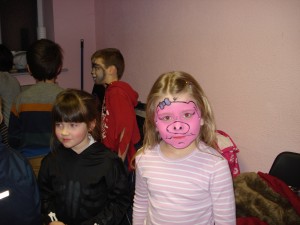 A Fabulous night of Verse and Drama was presented by the pupils of Boher N.S. on Wednesday 26th February in Boher Hall. The 3 presenters on the night rivalled Ant & Dec and Kathryn Thomas with their professionalism and coolness!!

First to take the stage were the junior classes who were word perfect in their renditions of popular rhymes that you thought you knew!! The audience was then treated to “The Three Little Pigs” but again not quite as you expected!! (in more ways than one as we discovered on the night!!)

The 6 “Yours Sincerely” winners read their winning letters for the audience who showed their appreciation for these talented writers.

It was then the turn of the senior classes to display their talents. “Confirmation Day” was followed by “Poor Barney”, again fantastic performances from all involved. “Waste not, want not” proved to be another great success with the audience. The final item was a “two hander” called First Date… a huge hit with one and all!